Home » Uncategorized » End of a Decade

Today is New Year’s Eve and we  are off for a murder mystery party to celebrate the end of a decade. I am usually in bed by 9pm so I think a daytime sleep is going to be necessary or I am likely to nod off. I have been known to doze momentarily with a gin and tonic in one hand; luckily I didn’t spill any! Tiredness continues to be the worst of my Parkinson’s symptoms followed by a left leg which tends to twist, throwing out my hip and knee rather awkwardly. However, that is only for part of the day.

The local Parkinson’s UK group, with membership of over 200, has been busy with Christmas activities including lunch for 90 at the local golf club. I wore my committee badge and met several people I had not seen before which was excellent. I am today taking the bi-monthly Branch magazines (titled “Shakers and Movers”) to local doctors surgeries. These will hopefully provide information for anyone just diagnosed or looking for help.
Our English National Ballet “Dance for Parkinson’s”  classes have finished for a few weeks. During our last session we were filmed for a TV programme about healthy living on Channel 4. This should be broadcast in February, more details when they emerge. We were working on a new version of Giselle by Akram Khan using sticks to punish the men! 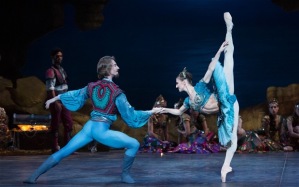 In January the class outing is to see Le Corsaire which should be great. The dashing son is  coming with me, I hope he enjoys the adventures of a pirate and his feisty girlfriend on the high seas.

Last week I went with the amiable husband to watch Brighton play Bournemouth in the Premiership. The Mighty Seagulls played well and won 2-0. It was an exciting game with much more attacking play than when I last visited some years ago. The weather was dry and fairly mild which was a bonus, I certainly notice the cold more! 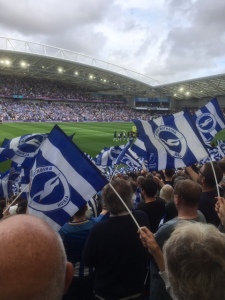 The lovely daughter and our grandson are still staying with us but will be moving a few miles away at the end of February. Watching Henry’s vocabulary increase every day has been wonderful!
This will be the first winter that we have not spent some of the season in Australia. We may have have had relentless rain and grey skies but that is infinitely better than the terrible fires they are experiencing Down Under.

5 thoughts on “End of a Decade”