Earlier this month I went to hear Paul Mayhew Archer talk about his life with Parkinson’s at the Komedia theatre in Brighton. It was the first time I had been there for 50 years and I felt very nostalgic when staff stamped your wrist; it reminded me of student days at discos.
Paul quickly had the audience in stitches as he told anecdotes of life with Parkinson’s interlaced with stories of his career. He is probably best known for co writing the “Vicar of Dibley” with Richard Curtis and comedies such as “Mrs Brown’s Boys”. He decided when he was told he had Parkinson’s that he was going to be an optimist and look for humour in every day life. The hour of comedy sped along with much laughter. Paul decided to go on tour with his show following success at last years Edinburgh festival, certainly the audience loved it!
I asked him how he was getting on with writing a “rom com” about a romance in a Dance for Parkinson Class. He chuckled as he explained that he could write the first two parts but was having trouble about what happened next,
We all left the theatre feeling uplifted! 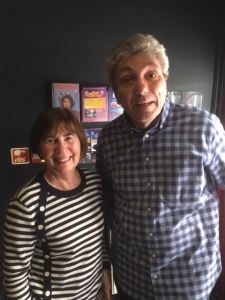 Paul Mayhew Archer and I at The Komedia Brighton.

The local Parkinson’s group held a pop up coffee morning recently. It is a great idea. Anyone wanting to find out about or share experiences of the  condition is invited to come along for free coffee and cake and chat.

The Lovely Daughter and Handsome Henry, plus Billy the 6kg cat, are now settled back in Sussex with us. Suddenly being awake early in the morning is no longer a solitary time but an opportunity to play with toy cars and Thomas the Tank Engine! My fumbly fingers may find nappy changing tricky but I can play endlessly on the carpet with a 2 year old toddler!

4 thoughts on “The Optimist”