There is a lot going on with Parkinson’s and research currently including two programmes on BBC2 starting at 9pm today, February 28th, which look at the drug GDNF delivered directly into the brain. Encouraging signs of a breakthrough perhaps?

One morning recently I received emails from both Dance for Parkinson’s in London and the class I visit when in Australia both telling me about the World Parkinson Conference in Kyoto, Japan, in June. It aims to give hope and raise awareness of the disease globally. Traditionally it was believed that if you folded 1000 origami your wish would come true. It has become a symbol of hope and healing during challenging times. Members of the Parkinson community who love to dance and move have been invited to create a dance piece inspired by the origami cranes (paper birds) in the art installation “Soaring with Hope”. Both groups that I belong to are submitting videos for this challenge which is exciting news

One of the main reasons we were in Australia at this time was to spend a week of looking after Handsome Henry while the lovely daughter was working in New York. Amazingly he slept every night and we were feeling a bit smug as we prepared to hand him back when crash, he fell over with us standing next to him and a large lump appeared on his forehead and a streaming cold began. A comb over was order of the day !

On the final day of our visit “Down Under” we spent the morning in the beautiful Botanical Gardens in Melbourne which is my favourite place to go. It is so peaceful and shady. 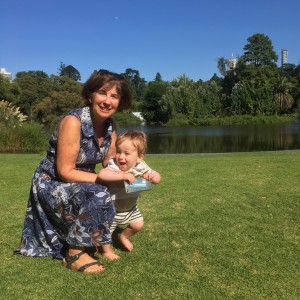 In the Botanical Gardens, Melbourne, with Handsom Henry.

We then began the long journey back, returning on the new Boeing Dreamliner which flies from Melbourne to Perth and then a seventeen hour flight to London Heathrow. I am not sure I would travel on that route again, it was exhausting! We arrived home to find daffodils in full bloom and beautiful sunny weather; not such a bad place to be!

3 thoughts on “What’s new in Parkinson’s?”