When you have a sore throat you expect that the medication you take will treat your throat and it will get better. It seems that when you take dopamine you don’t know which parts of you will be helped and there can be some surprises along the way. Swimming was my first activity to be affected by Parkinson’s and I could only manage a fairly torturous 15 lengths as recent as March. When I got in the pool recently I was amazed to discover that I could just keep going and I swam 48 lengths without any trouble. Recently when testing a walking route with a friend I looked down and found I was swinging the left arm and walking without a limp. Now, when I decided to try Madopar it was to help the tremor and spasm in my left arm and to some extent it has definitely helped the spasm but not the tremor very much. At a recent clinical massage the therapist said she thought my back seemed freer and when having a manicure my fingers didn’t twitch so much. Previously, in Australia, the beautician had despaired of painting my left hand nails telling me to relax repeatedly and then putting one of the sponge toe separators on my fingers! Down sides, of course there are some; very tired at times, dry mouth, need to go to the loo more and dreams that are incredibly real, but on balance at the moment it is helping with my everyday life, long may it continue! 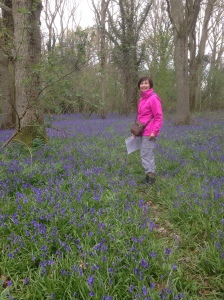 Bluebells in a Sussex woodland

This week has been Parkinson’s Awareness Week and there has been a brilliant programme on BBC television showing the humorous side of Parkinson following the comedy writer Paul Mayhew-Archer (he wrote The Vicar of Dibly) as he goes about his everyday life including attending a Dance for Parkinson’s class in Oxford and an item about a poet friend whose life has been turned round by Deep Brain Stimulation. Let optimism prevail! (The 30 minute BBC programe can be viewed, in the UK, at http://www.bbc.co.uk/programmes/b072xkcz.)

We have just returned from a few days in a chilly but sunny Scotland where we explored the coast of Argyll, some glorious places from lochs and glens to gardens and castles, including Inveraray where we chanced upon a piper playing in full costume; a great experience.

The piper at Inveraray

My particular favourite was an action packed boat ride in force 8 winds from Ardfern to see the Corryvreckan whirlpool – the third largest whirlpool in the world. Strong Atlantic currents and unusual underwater topography conspire to produce a particularly intense tidal race in the Corryvreckan channel – features combine to create whirlpools, standing waves and a variety of other surface effects. We also saw sea eagles, stags, seals and an osprey which flew just in front of us. Beautiful too was the train ride from Fort William to Mallaig, described as one of the great railway journeys of the world this 84 mile round trip included crossing the 21-arched Glenfinnan viaduct – a location made famous in the Harry Potter films.

Next week sees the resumption of the Dance for Parkinson’s classes in London. The group recently went to Saddlers Wells Theatre to see one of the first performances of “She Says” which we will continue to explore this term. In one of the ballets a dancer performs in one block shoe and one bare foot. I don’t think we will be copying that!